Changing a computer name to either a Windows Server or a Windows client is one of the first steps you will need after the installation of the operating system. Microsoft has chosen to automatically give a computer name consisting of a sequence of letters and numbers that for most people makes no sense to the role of the server or client.

In today’s article, you will see how to change the computer name in Windows Server 2016 by using the classic method through the GUI as well as the most ‘fast’ methods through the command line and of course Powershell.

Rename Windows Server 2016 from the GUI

In the new window, click Change settings, next to the computer name, as shown in the figure below.

In the Computer name field, type the new computer name you want your server to have and click OK.

To complete the renaming of the server, you will need to restart it. When you close the System properties window, a new window will appear to give you this option.

First, you will need to know the name of the computer you are about to rename. Open the command line with Administrator rights and type the following command to see the current computer name.

Next, we will use the netdom command to change the name. The command will look like this.

That is, to change the name from WIN-IMLI1SK9BV9 to SRV01 we will use the following command.

Confirm your action by pressing Y (for Yes) and Enter.

Open Powershell with Administrator privileges. Here, we will use the Rename-Computer cmdlet that will have the following format.

That is, in our case, it will be something like that.

Open Powershell with Administrator privileges and type the sconfig command to enter the system configuration environment through Powershell.

After you type the new computer name you will be prompted to restart it to complete the process. 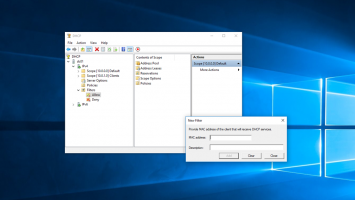